A new wrist watch strap developed by a South Korean company can actually turn your hand into a cell phone. It is called Signl and this innovative gadget transfers the signals from a cell phone and forces them to travel through your body. By bringing and hand or a finger to your ear, the sounds will be transmitted and heard.

The strap has been created by three entrepreneurs who used to work for Samsung Electronics in South Korea. The company is only a year old but already the strap has become somewhat of a sensation. The strap can be worn just by itself or it will adapt to any smartwatch regardless of the manufacturer. 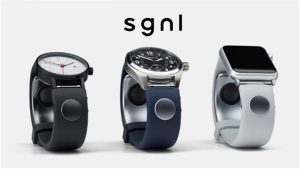 The sound is transmitted through your body and received by a Bluetooth device. Touching your ear allows you to hear someone who is calling and there is a microphone in the strap so conversation is as smooth as if you were just using your regular cell phone.

One of the inventors got the idea for the watch strap as he was just becoming disenchanted with his smart watch because he felt his conversations could be over heard and weren’t considered to be private. He explains that he wanted to solve a couple of challenges with his Signl strap. The first, he says, is that most who prefer a more classic look won’t use their wearables because it doesn’t really go with their formal business attire. The other was that most don’t really want to take a call on their watch because everyone around them can hear the conversation. 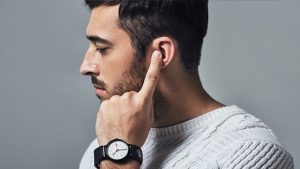 The inventors believe that they have solved those two dilemmas with their Signl strap. They are currently in the middle of a Kickstarter campaign in which they hoped to raise $50,000 in start up cash. So far, though, in less than a month, they have raised slightly over $800,000