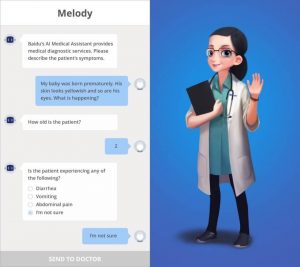 China’s gigantic search engine company, Baidu, has recently launched a smartphone app that will actually be able to tell you if you are sick. The app has launched in China and it is expected to be heartily embraced but analysts are not that certain that the English version, and eventual American launch, will be successful.

Not only will the app be able to determine if your are sick, but will be able to hook you up with a doctor right away. It is an artificial intelligence technology that uses a character by the name of Melody the Medical Assistant which works with a previously launched Bauidu app called Baidu Doctor which can do the diagnosis and connect you with a local doctor.

When a user logs on to the Bauidu Doctor app, up will pop Melody who asks a series of ten questions in a effort to try and discover the malady. Wei Fan, a senior director at Baidu, noted that, “The bot will ask questions to verify the symptoms along with others the patient hasn’t disclosed yet.”

Fan notes that the bot can get into greater depth with regard to symptoms than a typical medical site like WebMD, can get. He also states that the company has taken great pains to, not only develop a formidable health app, but to get Chinese doctors on board with the whole technology. Thus far, he said, over 150 doctors have approved and have signed on with the app.

“Doctors are very well respected in our society,” Fan said, “and you have to make these systems loved by doctors.”

American doctors, however, are far more skeptical and will not endorse anything that doesn’t save them time or make their lives easier. While Baidu remains one the great tech giants in the world, they will have challenges when they decide to bring Melody to the United States. Aside from them, there are others, like Google and IBM, who are also working on artificial intelligence aimed at medical diagnosis and overall health care issues.

Currently, there is no dominant player and the use of artificial intelligence technology in the health and wellness industry  continues to be in its early stages.