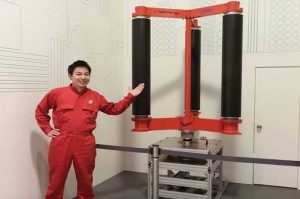 An inventor in Japan has designed a wind turbine that will enable the world to harness the devastating power and energy of a typhoon. Inventor and engineer Atsushi Shimizu has done just that. He hopes his new turbine will collect and redistribute the tremendous amount of wind energy provided by a typhoon.

Japan is hardly a stranger to the devastating power of typhoons as the country has survived six of them in this year alone. Shimizu proposes that the energy collected from only one typhoon could power the entire country of Japan for fifty years.

“Japan actually has a lot more wind power than it does solar power,” Shimizu said. ” It’s just not utilized.”

Japan suffers from a tremendous shortage of renewable energy as well as energy production in general. Most of this leads back to the 2011 disaster at the Fukushima nuclear power plant that was destroyed during a horrendous tsunami. Shimizu sees his new turbine as a way to save Japan and to provide his country with energy for a long time to come.

Shimizu has founded an energy tech firm and he looks to o into full production on his turbine. Before the tsunami that killed nearly 20,000 people, Japan was placing its energy bets on nuclear providing upwards of 60% of Japan’s future power needs. Because of the nuclear disaster, Japan is currently importing nearly 85% of all of its energy. Shimizu points out that Japan has imported wind turbines in the past but because they were poorly built and placed, they are all pretty much broken and useless now.

Even in China, and elsewhere around the world, wind turbines are breaking down and collapsing as the technology for the wind farms just doesn’t seem to be as cutting edge as everyone believes. Shimizu’s typhoon powered wind turbine has a new design that allows the turbine to go with unpredictable and ever changing patterns and forces of the wind. It is flexible and can take in all of the wind that comes anywhere near it. In addition, there are speed controls on his turbine so that they can be adjusted so that the turbine just doesn’t blow away in a severe wind storm like a typhoon.

Shimizu has successfully tested his turbine but still wants to do further development on it before he looks to really ramp up production and possibly begin to have them set up all over the country.