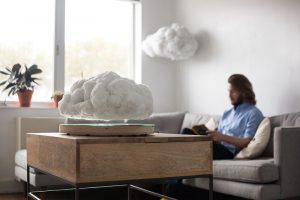 Two years ago, the American designer Richard Clarkson created something he called a Smart Cloud. It was a ceiling lamp, containing a bluetooth speaker, built to resemble an ominous thunder cloud. It was a huge break from traditional design for such things but the drawback to it was that some of the realistic quality was taken away by the cords that hung from them.

What he was looking for was a true, floating cloud. So he turned to a company in The Netherlands called Crealev. This young Dutch start up specializes in technology that uses, and advances, magnetic levitation. This seems to have brought to fruition Clarkson’s weather and cloud vision technology and design. 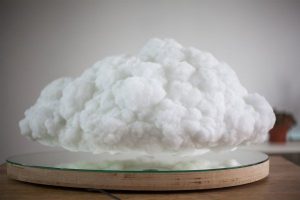 The speaker has a powerful combination of magnets inserted in both the cloud and the base over which it hovers. The Making Weather speaker can now truly emulate a floating cloud as it just hovers suspended in mid air. Along with the gentle bobbing up and down, the cloud speaker can also slightly rotate so as to produce the full natural looking effect. 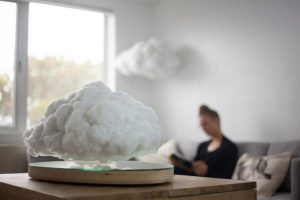 The cloud has been built from fine fibers made of polyester and will not trouble anyone who has allergies. In addition, there is LED light technology embedded within the could so that it lights up from time to time to give it the storm and lightning cloud look and feel.

Currently, the bluetooth speaker cloud is still in the prototype stage but Clarkson hope to make it available for production in the near future.