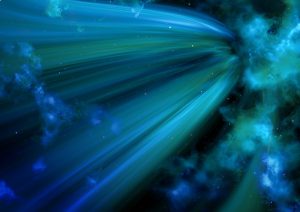 Students in England, at the University of Leicester, have come up with a plan to build photon torpedoes which have been featured on the Star Trek television and movies series for the last fifty years. One idea they came up with was that they would need to use certain metals that have a plethora of protons such as uranium and lead.

Their idea was published in a peer review physics journal and the students spent countless hours examining the television show as well as the movies for clues on how to build such things. They determined that they would need some manner of explosion to set off a combination of both matter and anti-matter. They look to trigger a large enough chain reaction that will force the matter and the anti-matter to crash into one another creating the explosion they need to produce the photons.

They want their “initiator” to be powerful enough so that their energetic reaction will produce both positrons and electrons. When all of this interacts with their heavy metals, they see this as the ultimate fuel for their photon torpedoes. They calculated that these reactions will continue until the positron and electrons are numbered at 10 to the 30th power. This will end up being a rest mass of three kilotons for the pairs of positrons and electrons.

The students further calculated that when the pairs reached that 10 to the 30th power number, they will begin to collide into one another producing an explosion of photons. They chose lead and uranium because of their large number of protons. Lead has 82 protons with uranium having 92 protons.

As future triggers for their proton torpedoes, the students theorize that lasers or gamma ray bursts could be used to begin the cascade of explosions that will produce the photons used for the torpedoes.