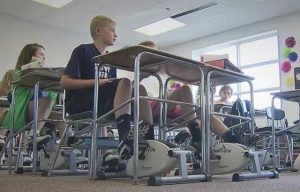 A North Carolina middle school math teacher has come up with a way in which, she says, will improve her students concentration. She, like everyone, realizes that math is not everyone’s favorite subject and, for her eighth graders, there always seemed to be a lot of restlessness going on during class.

So, she decided to try installing foot cycles under the desks in her classroom. Bethany Lambeth, the middle school math teacher from Wake County, North Carolina, said that she had always had to compete with her students for attention. Not everyone, she says, was focused when they came to her class.

“Before,” she said, “they were drumming on their desks, they were touching other people, they’re not doing that anymore. Their feet are getting the movement out. There has been a huge increase in the quality of our student’s work and a decrease in the amount of missing work.”

The cycling machines went for $150 each and Lambeth raised the money to buy them all with donations. No taxpayer money was used at all for the project. After seeing the success that young Ms. Lambert has had, the school officials in the county are seriously looking into other avenues where the foot cycles might be useful such as in special education classes.

Her students, it seems, have really taken to the foot cycles. One of her students, Sophia Fedele, said that, “I usually tap my feet and stuff just because it would keep me focused.” The new foot cycles, she says, “keeps me exercising and focused.”

Another of her students, Quinn Spear, agreed with his classmate. “I’m a really energetic person so it takes all my energy out.”

Young master Spear also figured out that he ended up cycling five and a half miles and burned off 133 calories.

Now, that is math class in action…