White orcas, or killer whales, were once so rare that scientists only counted one of them on the entire planet. Now, it seems, there are a few that have attracted the attention of researchers located in the northern and western part of the Pacific Ocean. One was spotted recently, once again, and seems to be the same one these researchers spotted back in 2010.

Now, however, this white male killer whale seems to be swimming alongside a second white orca in this small group. The researchers are out of England and operate an organization called the Far East Russia Orca Project named after the area of the world in which they have been operating for the last several years. What seems to be worrisome, and indeed quite puzzling to these orca researchers, is that in the past couple of years they have spotted at least five white killer whales and possibly as many as eight of them.

The researchers, led by Erich Hoyt, believe there may be as many at eight of these white orcas in this particular social and cultural group. That is a ridiculous and unheard of number according to Hoyt. The researchers fear that this particular orca group is seriously inbreeding. White killer whales are unknown outside of this tiny section of the Pacific Ocean. No one has ever seen one anywhere else on the planet. 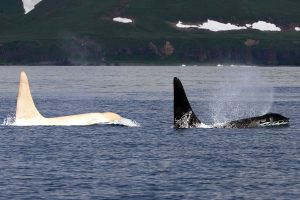 “What we are seeing is strange, “says Hoyt. “It’s a very high rate of occurrence. All of the other areas where orcas are studied intensely, have zero or one white whale historically.”

In the tiny Pacific Ocean region where they have been in constant study, Hoyt and his team figure there are several thousand killer whales in that small area. Because of what they are seeing now, they believe that there may be one white orca for every 1000 or so regular black and white ones.

Albino creatures, Hoyt notes, tend to spring up in mammal populations that are closely inbred yet he sees no real evidence of that here with the orcas. Thus, the appearance of so many white killer whales is currently a mystery. The team hopes to grab some DNA samples to see where the population currently stands.

Orcas live in groups that really have their own cultural stamp much like the different human countries around the world. Their culture and identity is directly tied to the type and style of hunting they employ.