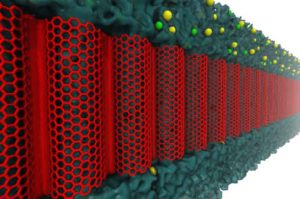 Many have been wondering for decades why the United States, as well as other nations besides Saudi Arabia, aren’t building water desalinization plants off their coasts. It would certainly solve the drought problem currently being experienced in California. Perhaps the politicians haven’t figured out a way to make money off it yet.

So, the research team at the University of Illinois has invented a system they call nanopores. They are using a thick and massive material known as molybdenum disulphide, which filters nearly 80% more water than graphene, and have impregnated the material with thousands of tiny, almost microscopic holes, they are calling nanopores.

Narayana Aluru, lead author on the study said that, “Even though we have a lot of water on this planet, there is very little that is drinkable. If we could find a low cost, efficient way to purify sea water, we would be making good strides in solving the water crisis.”

The major difference between this system and a gigantic desalinization plant is that everything is small and more manageable as well as being far less costly than building a plant. Another challenge with a desalinization plant is that the entire system gets bogged down in several places and loses efficiency due to its reliance on reverse osmosis. The amount of energy to operate a plant of that size is enormous.

The membranes used in Aluru’s system are so thin that the water just rushes through in greater quantities and with almost no clogging or resistance. The materials actually force the water to come through it.

Aluru said that, “Finding materials for efficient desalinization has been a big issue and I think this work lays the foundation for next generation of materials. These materials are efficient in terms of energy usage and fowling, which are issues that have plagued desalinization technology for a long time.”