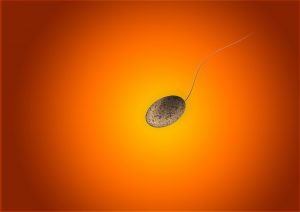 A French research company called Kallistem has announced that they have created human sperm in controlled laboratory conditions. The research team claims, that after 20 years, they now have it down to a process that takes 72 days to complete. This has never been done before. In 2011, Japanese scientists created rat sperm and the Chinese duplicated those efforts early in 2016 but no one has ever created human sperm.

Skeptics, as usual, abound but they have decided to hold off on any scientific retort because Kallistem’s results are actually being published this month in a peer review journal called Biology of Reproduction.

The company had taken out a patent on the 72 day process sometime last year with regard to their experiments concerning both rat and human sperm. The initial step, the scientists state, begins with testicular cells that are called spermatogonia.

The French scientists claim that they are doing it to help young males who are afflicted with cancer during their young childhoods. They claim that the spermatogonia tends to be destroyed by the cancer. They say that if they can take samples out of young boys before their treatment for the cancer begins, it can be frozen and saved for when the boys are old enough to want to have children. 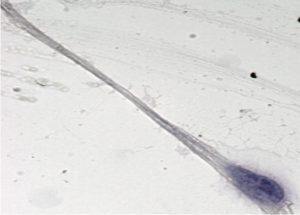 This what the sperm looks like after 50 days of growth.

The researchers took rat testicular tissue that they believe was immature enough to be representative of young human boy sperm and looked to actually create human sperm from that. They combined this with testicular tissue from grown human males that were in the middle of hormone therapy. This, they hoped, would allow the tissue to go to a state of prepubescence.

Then seminiferous tubules, which are located in the testes, are put into cylinders with a gel like substance called chitosan. This mixture is then put into a bioreactor where air is allowed to move in and out of the cells. This is critical to the scientists and they state that the porous nature of the gel also eliminated bacteria. They then take the cylinder and put it into a mixture of vitamins and other nutrients and wait for the prescribed 72 days. At the end of that time, the chitosan had dissolved away and all that was left was human sperm.

An Israeli team at the Weizmann Institute of Science, in Israel, claims that the study has not actually produced human sperm. The Israelis are working on the same project of trying to produce human male sperm. The Israeli’s don’t believe that the French scientists have actually done it.

The Israeli’s claim is that, for the findings to be significant, the created sperm would have to fertilize a female human egg. The French team states that they are currently in the process of doing exactly that.