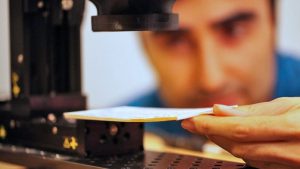 Researchers at MIT have created a camera that allows someone to actually read a closed book. By using terahertz radiation, the research scientists were able to develop the camera so that they could see and read the contents of a closed book.

They hope it will aid in scholarly research done by those who research ancient manuscripts and books that are far too fragile and delicate to be opened. Oh, the spies of the world have also taken notice of the invention. Three researchers from Boston based MIT were also helped by a pair of researchers at Georgia Tech.

Right now, the experiments have progressed where their new camera can distinguish between 20 pages of a particular book and can show people the content of the first 9 pages in the book. The researchers hope to eventually be able to improve the technology of the camera so as to read an entire book without ever having to open it.

The camera has been designed to reflect sensitivity so great that the camera can even measure the distance between the pages of a book. That space, the researchers say, is about 20 micrometers thin and, because of this ability, researchers can actually see when they have arrived at a new page in the book.

The camera measures and records the frequencies thrown off by the tetrahertz radiation and it takes sophisticated and advanced software and algorithms to translate the frequencies into an image that can be seen as a page from a book.