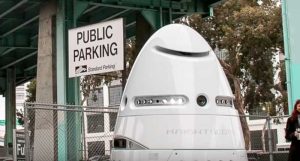 It moves around slowly and cautiously. It tries to be inoffensive and stay out of people’s way but sometimes the new parking lot robot located in Palo Alto, California, at the Stanford shopping center, just wants to be part of the crowd. Sometimes the new security robot will try and maneuver past someone and it ends up being a mild collision.

The idea was hatched by a former police officer from Dallas, Stacy Dean Stephens. He has founded a non-profit company called Knightscope and they rent out the robots to anyone who wants one for $7 an hour. He hopes it will prevent future tragedies like the one in Connecticut at the Sandy Hook Elementary School. He, and many other former law enforcement people, believed that if the police had got to the school only a minute sooner than they did, they might have been able to actually prevent that tragedy or saved at least a dozen lives that were eventually lost.

“That was a problem,” said Stephens, “that we felt was definitely worth solving. So, we started looking at a way to deploy eyes and ears into situations like that.”

The robots operate by themselves much like the Roomba vacuum cleaner or a self driving vehicle. They have state of the art microphones and infrared cameras and can actually interact with people. They can also process 300 license plates a minute. The microphones are so sensitive that they can hear glass being broken and alert message sounds on cell phones.

Stephens explained that the non threatening egg shape to the robots was an intention of the design. He felt that he didn’t want people to feel threatened by it. He wanted people to feel safe and feel that it was friendly. He wanted the robot to be like a police officer who well knows how thin the line is between being a comforting presence and a threatening one.

Stephens says that, so far, everyone seems to really like the robot. People, he says, are always stopping and taking selfies with it. He even tells of the day that he found two lipstick imprints on the robot.