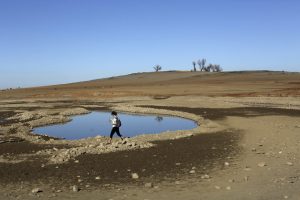 The IBM supercomputer, Watson, has recently been enlisted to help California battle its terrible drought conditions. The supercomputer crashed its way to fame and fortune by defeating the best human brains out there in such games as Go and television’s legendary Jeopardy show. Now, however, Watson turns its abilities to a more serious problem.

A California environmental consulting firm has been given the use of Watson to try and track water usage and to, perhaps, develop a plan to make better use of the precious resource in California. Thus far, the company has made use of Watson by having it scan satellite images of California in order to locate available water and to try and map out what areas have been most affected by the drought.

California has been under a severe drought warning for a long time and Californians have been having to conserve so that water might be diverted to the farmers. Some restrictions on the water amounts that farmers can use have been eased of late but the drought conditions remain severe.

As of now, Watson can record and scan 150,000 satellite images in about 12 minutes or so. The local California governments have been using the data to better plan their usage and budgets as well as to go after offenders who are using more than they are allowed to. Watson evaluates every image so that a complete overall understanding can be had of a particular area.

By the use of machine learning, Watson can take previous training data and incorporate it into its analysis giving as complete picture as possible regarding drought areas and water usage. This knowledge will eventually be transferred to a system whereby California’s water supply can be fairly distributed and violators can be tracked down and punished.

Thus far, there has been a 15% drop in overall water usage in the state thanks to Watson’s calculations. Such a reduction has been greatly welcomed by California. IBM retrofitted Watson, after the Jeopardy contests, to be a cloud based system that anyone may have access to for research and applications.