Reincarnation has been around since the very dawn of time. More humans on this planet believe in reincarnation than don’t. In fact, for them, it’s not a matter of belief but a matter of fact. Two of the worlds major religions, Hinduism and Buddhism, hold reincarnation to be a basic truth. For many, it’s the only way that can sensibly explain their current human condition.

Science has come quite late to the belief though many scientists, such as Carl Sagan and Nikola Tesla, accepted the concept as reality and truth. Here are a few extraordinary stories of children who have remembered previous lives. For humans, when we are young, our psychic abilities are powerful but we lose them by the age of six or so because we live in a society and culture that berates and dismisses such realities.

The following stories come from a psychiatrist named Jim Tucker, of the University of Virginia, who has studied reincarnation extensively and published his findings in a 2008 book. Tucker states that children are highly emotional about their recalling their previous lives and many beg their current parents to take them to a previous family. 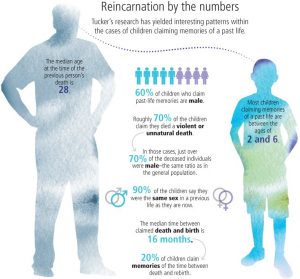