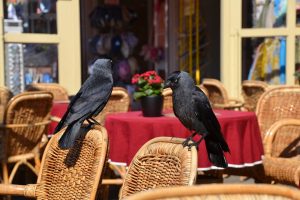 Recent research into crows and ravens has discovered that these birds not only have their own language but are extremely intelligent. Many researchers believe them to be even smarter than apes, even chimpanzees. In addition, research has found that crows are also toolmakers.

Do crows have a language? Can crows talk? There has been a few recent studies, as well as books, that have come to these conclusions. In one study, at Oxford University in England, a crow actually bend a piece of wire to form a hook which it then stuck down a tube to gather up the food at the bottom. The researchers declared that not even the apes could solve a complex problem like that. The team believes that crows are in the human class as far as tool making abilities go. Despite their brains being so much smaller than chimps, the crows, in many exercises, performed just as well if not better.

Alex Kacelnik, the lead on the Oxford University study, said that crows and ravens are, “both intense tool users and creative tool users. In addition to the tools that they are normally seen using in the wild, they are capable of making new instruments.” 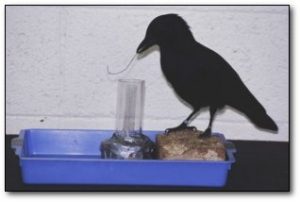 Other recent crow research has identified over 100 words in the crow language. All of the caws have specific meanings especially when combined in their short bursts. Also, crows have great memories, can conspire with each other, and can remember human faces. Face recognition experiments done at a college campus in Seattle found that the crows not only remembered people who passed by everyday, but that they also will hold a grudge against a particular human face that they don’t like. Also, if you were rude to them, they remember and will make you pay. They will find you and they will bring their friends. They are strong social creatures which is why you will rarely see one alone.

Crows and ravens also have excellent planning abilities and will store food for tough times. They are omnivores and opportunists and are wary, like humans, of other crows looking to steal their stuff. Crows have been seen looking to stash food and then fly off but actually kept the cache tucked into their chest feathers in an attempt to throw the other crows off the scent.

Finally, crows can adapt to any surrounding or environment and are quite astute about human behavior. They have been seen with walnuts and will toss them in front of passing cars in an effort to save themselves some labor. They do this because the will sit and watch the traffic, especially at intersections, and seem to know the traffic light colors and will drop the nuts at the exact time a light turns green.

In addition, the crows will only wander out to retrieve the nuts when the light is red or the crosswalk sign is on. They know they will get run over if they don’t. What is even scarier? Research has found that only about 10% of humans understand that same seemingly simple concept of red lights and crosswalk signs.