Scientists have recently discovered that a galaxy the size of the Milky Way galaxy is made up almost entirely of dark matter. The galaxy, known as Dragonfly 44, was originally found back in 2015 and was in a cluster of about one thousand galaxies that are at least 300 light years or so from Earth.

What the astronomers noticed after a while was that even though Dragonfly 44 was an extremely bright galaxy, it was only throwing off about one percent of the light thrown off by the Milky Way galaxy. For them, this galaxy was pretty much trying to hide from them. They decided to see if they could prove a hypothesis that, perhaps, this galaxy was composed of mostly dark matter.

Dark matter has never been seen but scientists are convinced that it exists because, they postulate, the dark matter’s gravity affects surrounding objects which they can see. Physicists further speculate that about 80% of the entire universe is composed of this dark matter even though no one has ever really “seen” it. 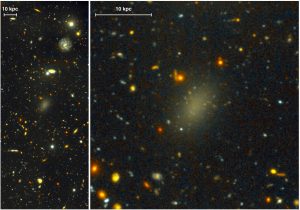 Pieter van Dokkum and his astronomer colleagues at Yale University had originally found the one thousand galaxy cluster a few years ago but Dragonfly 44 always seemed odd to them. So, they traveled to Hawaii and looked at it through the extremely powerful telescope at the Keck Observatory. The reason they began to speculate about 99% of the galaxy being made up of dark matter was because there aren’t that many stars in the galaxy. The astronomers couldn’t really figure how the galaxy was holding itself together with so few stars.

There must be more of a density there, van Dokkum believed; more mass there than anyone could actually see. He said that, “Motions of the stars tell you how much matter there is. They don’t care what form the matter is, they just tell you it’s there. In the Dragonfly galaxy, stars move very fast. So, there was a huge discrepancy; using Keck Observatory we found many times more mass indicated by the motions of the stars than there is mass in the stars themselves.”

So, van Dokkum states that only one percent of the galaxy is electrons, protons and neutrons. The remainder is dark matter.

“This has big implications for the study of dark matter,” van Dokkum said. “Ultimately, what we really want to learn is what dark matter is.”