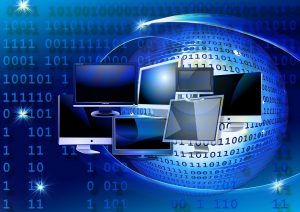 The World Wide Web, and its underlying infrastructure known as the internet, has reached a critical mass point where, if more bandwidth isn’t brought in soon, the entire communication apparatus could crash. According to recent research, the World Wide Web traffic globally keeps expanding by around 22% every year. The current pace doesn’t allow broadband carriers to keep up with the infrastructure demands fast enough.

The essence of the internet, and the World Wide Web, continues to exist on the foundation of telephone line systems that are over 100 years old. Even though copper has been largely replaced by fiber optics, the shear magnitude of world wide traffic is causing breakdowns and serious “traffic jams” everywhere in the world.

Larger hubs and companies are barely keeping up so when you get down to smaller hubs and towns, things have been slowing down of late. During peak hour use, everyone is feeling the slowdown and even missed connections. Mobile calls are dropped or garbled, videos take forever to buffer and some sites take several minutes to load their home page. Experts on the problems just seem to shake their heads at those who are promising such things as 3D reality gaming and mobile videos in high definition. They know the system, right now, would never be able to handle those things. 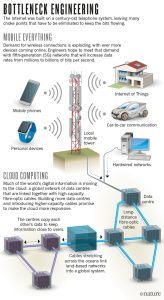 Such tech giants as Google and others are spending billions and working furiously to lay new cable everywhere they can. Google is laying about 13,000 miles of new cable in five Asian countries and companies like Microsoft and Facebook are going to be laying underwater cable across the oceans beginning some time in 2017.

But will it be too little too late? Will any of this flurry prevent an eventual crash?

During the internet investment frenzy that finally crashed in 2000, there was a huge amount of optical fibers known as “dark fibre” laid down but they were never put into use until just recently. Many carriers and providers are scrambling to handle the increase in traffic but putting some of this “dark fibre” into play.

And, now, the phone companies are starting to tout their new 5G capabilities but no one is even sure if the infrastructure can even handle it. Some are suggesting moving to higher frequencies or just eliminating 2G and 3G capability and fill in those holes with 5G.

What everyone seems agreed on, however, is that new technologies, and much more of them, need to be developed quickly or the entire network of global communications could come crashing down and causing untold chaos.