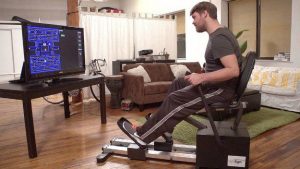 The new SymGym may look like a piece of serious exercise equipment but it is actually a combination of workout equipment and video game controller. In reality, it allows the player to receive a full body exercise workout while playing their favorite video games.

SymGym is a new start up company based in Chicago and they have created the new innovation that also brings some unique touches and experiences to video gaming. The controller will actually make physical adjustments according to what is going on in a particular game at a particular time. The standard buttons and joysticks are now pedals and hand levers. These levers and pedals are what manipulates the action in the video games and allows for a more strenuous workout depending on what you are doing. 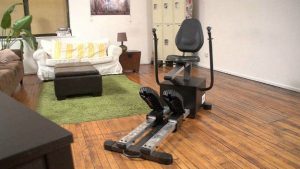 If you are climbing up the side of a hill, you will feel the machines resistance strengthen to a point where it becomes much harder than if you were just walking along a floor in the video game. Need to pick up something heavy like a giant boulder? Well, you will need much more physical strength to actually do it that if you just had to pick up a fork.

The company says that any video game can be played with the new SymGym because the technology has been adapted to both Xbox and PlayStation console technologies. While the new technology works best with simpler games like PacMan, the company is getting independent game developers to design games specifically for use by the SymGym controller. 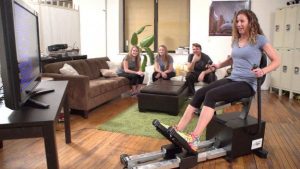 The company is also working on the development of a SymGym gaming platform online where competitions can be held and specific games played. While platforms like Wii and Nintendo try and develop game action that encourages the players to get up and move around, SymGym feels they have taken that concept another step further toward a possible total interaction.

The device also comes with full data capabilities so that players can track their resistance and calories burned over time. The company looks to launch the new controller before the end of 2016.