The remains of an ancient marsupial that roamed Australia over 18 million years ago were recently discovered by paleontologists in a remote and untamed region of northern Queensland. The scientists say that the “micro lion” was rather small weighing in at around 1.3 pounds and much smaller than similar species around at the time. It is the first remains ever found of such a creature that have been classified in the marsupial lion family.

The discovery was made in the Riversleigh World Heritage Area, which is considered one of the four richest places on Earth for finding fossils. The paleontology team that led the dig were from the University of New South Wales. There has been a great number of significant fossils found there of creatures that are in the marsupial lion species.

A large portion of skull section has been dug up that contains distinct and razor sharp teeth and, though much smaller than many of its marsupial lion brothers and sisters, paleontologists generally agree that it was a fearsome carnivore all on its own. 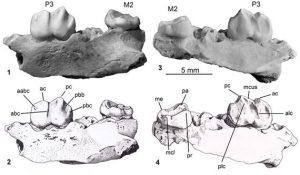 One of the paleontologists on the dig, professor Mike Archer of New South Wales University, said that, “Despite its relatively small size… the new species was one of the larger flesh eaters existing in its ancient community of rain forest creatures at Riversleigh.”

Excavation and discovery has been going on at Riversleigh for nearly fifty years and this is the first Microleo, as they are calling it, to ever be found there. The team is excited and hopes for further opportunities to unearth more of them.

Lead author on the study, Dr. Anna Gillespie, stated that, “Microleo shared these northern Miocene rain forests with two larger species of marsupial lion. Although it is possible that they competed with one another, the size differences probably means that they each specialized on a different size range of prey. It is likely that Microleo scampered amongst the tree tops gobbling insects as well as small vertebrates such as lizards and birds while simultaneously trying to avoid becoming a prey item for its larger relatives.”