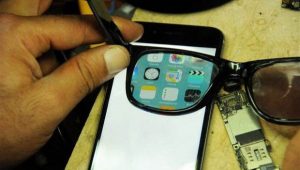 A man from Turkey has invented a pair of eye glasses that will make your cell phone screen invisible to everyone but the wearer of the glasses. Celal Goger, 43, a cell phone repairman, has created the eyeglass to specifically interact with the cell phone screen to keep it hidden from those prying eyes whenever you are in public.

The idea for the invention hit him one day a couple of months ago while he was on the subway checking his email. He began to notice how many people around him kept peering over to check out what he was doing and to read his emails. He wanted to come up with something more secure. So, when he got out of work that day, he headed home and began to get to work in his home made lab. 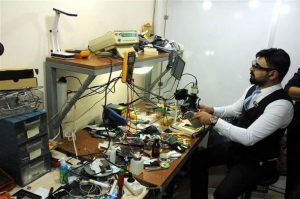 Celal at home in his lab.

His system turns the screen of a cell phone, laptop, or tablet all white unless someone is looking at the screen through his glasses. The story has not been reported in the West and only a few outlets have carried the story in Turkey. Apparently, Celal programmed two chips; one for the cell phone and one for the glasses that allows them to do what he designed them to do and to interact.

Celal on the street stopping strangers and getting them to try out his new invention.

It uses a Bluetooth system to regulate it and to power it on and of and only costs around ten dollars to make. The glasses, he says, can actually work on any device that has a screen, even a television. Flip the switch on the glasses and the screen turns white for anyone looking at it except the person wearing the glasses.

Celal is currently investigating the process of getting his glasses legally protected with a patent and is exploring how to begin to mass produce his technology.