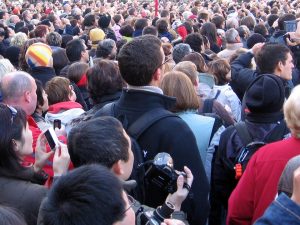 The possibility, and the reality, of large crowds stampeding in a emergency is, sadly, no longer a possibility. From live shooters at crowded international airports, to huge sporting or entertainment events, to religious congregations at such sites as Mecca, the danger of stampeding people who have no where to go is all to frighteningly real.

Two Japanese giants, Mitsubishi Electric and the Research Center for Advanced Science and Technology, located at the University of Tokyo, have come up with a system design, they believe, can simulate crowd behavior and even predict it to the point where the system will allow for authorities at events to be better prepared for unexpected evacuations.

Current crowd control systems, Mitsubishi says, rely on data that had been previously collected from an event. That data is then placed into a crowd movement simulator which will produce a map of the density of the crowd. This new system, states Mitsubishi, stations cameras at all of the strategic locations of a particular venue. What this does is to, effectively, allow the cameras to track the pedestrian flow rate as it moves along certain clear pathways. In this way, the traffic flow can be seen in real time.

For Mitsubishi, this completely eliminates the need for the previously collected data that can’t truly reflect how a crowd will move or react. Mitsubishi claims that the previous models of collected data simulation can only yield a 50% accuracy rate. Their new system, they say, can produce an 80% accuracy factor. This new system prints out color coded maps that show the real time density of a crowd.

Rather than focus on everyone at the event, Mitsubishi’s system only focuses on smaller groups which, they claim, increases the accuracy of the projections. Mitsubishi recently tested their system at a huge fireworks event that was held last week in Tokyo. They used eight cameras at the event and Mitsubishi hopes that the results will soon be able to provide for better and more efficient crowd control. They hope it will prevent tragedies due to stampeding because the people in the crowd panic because they can see no easy way out of where they are.