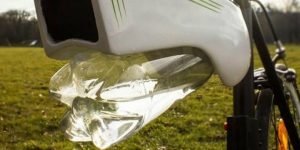 The device is called a Fontus and it is designed to draw humidity out of the air and turn it into drinkable water. It is the invention of Austrian designer Kristof Retezar and the research had all been funded by the government of Austria.

The initial device has been specifically designed to be attached to a bicycle and to draw the humidity out of the air as the bicycle is moving. Behind the invention lies the understanding and application of condensation. Humidity is nearly always present in the air. If you take a can or bottle of liquid out of a refrigerated situation, soon condensation will begin to form in the manner of small water droplets that begin to form on the sides of the can or the bottle.

“This is simply condensation of the humidity that is contained in the air,” said Retezar. “You always have a certain amount of humidity in the air and it doesn’t matter where you are – even in the desert. That means you would always be potentially able to extract that humidity from the air.” 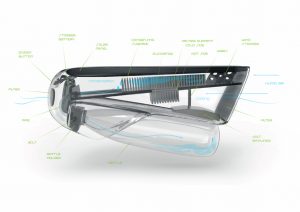 The Fontus can generate about a half liter of pure water in about an hour’s time and is entirely solar powered. There is a condensation unit that takes on the functionality of a cooler and this unit is attached to a hydrophobic surface that enables the water to be repelled and collected.

“As the bike mounted gadget takes in air,” Retezar explained, “and when these surfaces get cold, you’re left with condensation. Because they are hydrophobic, they immediately repel the condensed water they created so that you get a drop flow. Basically, you’re taking air in a vapor state and converting it into a liquid state.”

While their is the potential for contaminants to get into the water, the filtration system does keep out a certain amount of debris as well as insects. While the prototype has been funded, Retezar is expected to soon begin a crowdfunding project to raise the money needed to mass produce his invention. He hopes to begin within a few months and the device is expected to retail for under $100.