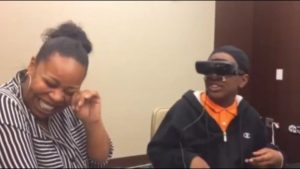 A pair of digital glasses has allowed a 12 year old boy from Virginia to see his mother for the first time in his life. Young Christopher Ward, Jr., who is in the fifth grade, used the new Esite electronic glasses to try and overcome the eye muscles that never developed and has left him legally blind since he was born.

The glasses, developed by the Esite company of Toronto, records live video and streams it back on specially developed LED glasses so that the viewer can watch it. His mother, Marquita Hackley, 32, was overcome with emotion. She never gave up on her son being able to see even though doctors had repeatedly told her that Chris gaining his eye sight would never happen.

When Chris first got to see his mom he said, “Oh, mommy! There you are!”

Hackley immediately broke into tears after hearing those words from her son. Young Chris also got to, for the first time, see words actually written down on a page. Hackley continued to be overcome emotionally when Chris declared, “I have seen my mom and she is very pretty.”

The two had traveled to Washington, DC a few weeks ago to learn about and see the new technology developed by the Esite company. Hackley saw the glasses as true hope for her son but became instantly deflated when she found out that the glasses cost around $15,000.

She decided to set up a crowd funding attempt at YouCaring. com to raise the money. Her story was tracked down and told by ABC News on Thursday night. Because of that exposure, she has managed to raise over $25,000. She plans to buy some glasses for him right away and any of the extra money will go into a trust fund for Chris so he will have money when he needs it.

To her generous donors at YouCaring, Hackley said through tears, “I want to say thank you a million times to each and everyone of you that have donated. Each of you have helped us shatter the goal! Thank you and god bless!”