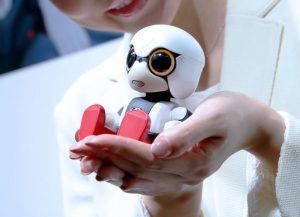 Toyota has debut a robot baby. It is named Kirobo Mini and it will fit in the palm of a human hand. In yet another leap forward in the companion robot genre, Toyota hopes these robot babies will appeal, and sell, to young Japanese women without children. Japan’s national birth rate has been in free fall for many years and Japan hopes the little Kirobo Mini’s will somehow help.

Japan struggles with an aging population that is far outnumbering the youth of the country. Toyota hopes the women of the country will establish an immediate maternal and emotional connection with Kirobo. The robot baby can speak in a squeaky child like voice an it wobbles when it is sitting down. The Toyota engineers have done just about everything they can think of to get the little robot to act like a human baby. 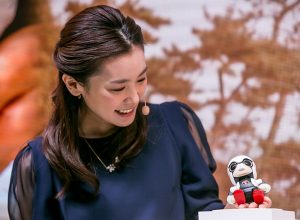 The robot baby can also blink its eyes and it comes with a special cradle that can transform into a car seat. The cradle/car seat has been designed by the engineers to fit perfectly into any car cup holder. Toyota looks to put the Kirobo robot baby on the market some time early in 2017 and it is projected to retail for about $390.

It does appear as if the robotics community expects companion robots to be a huge hit in the near future. MIT engineers are poised to reveal their own robot baby that is said to look like a table lamp while another Japanese company is developing a companion robot for people suffering from dementia. Nearly 30% of the Japanese population is older than 65 and it is causing a huge strain on their health care system because not enough young people can get into the field quickly enough to handle the overwhelming patient load.

The Japanese are turning to robots rather than to allow any manner of immigration to come into the country to try and offset the age differences and to provide workers for Japan’s corporate sector. Japan has always been a rather close off society and to allow many foreigners into the country is rather unheard of.

Japan is second only to South Korea in the use of robots in their industrial sector.