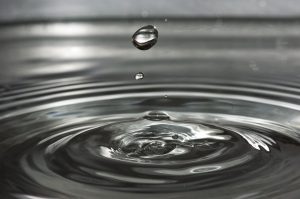 Her name is Rachael Warwick and she is deathly allergic to water.

Rachael suffers from one of the rarest afflictions known to humans: aquagenic urticaria. It is so rare that it only afflicts one out of every 250 million people. For Rachael, it is no laughing matter, or a crying one for that matter. Even her own tears are poisonous to her and will cause her great pain. The affliction feels like a combination of severe flu and hay fever combined with the physical feeling of being stabbed by millions of tiny needles.

If she wakes up in the middle of the night because she is thirsty, she dreads heading to the bathroom for a small glass of water. As she drinks, it feels as if the sharp needles are attacking her throat. Her face begins to break out in a rash and severe blistering. She can’t go out later in the day because it is raining. She doesn’t dare to cry because, if she does, her eyes and face swell up and the burning begins again.

When people discover her horrible affliction, Rachael says that, “When I meet people, there’s always a lot of confusion. I get all of the usual questions like: ‘how do you eat?’, ‘how do you drink?’,  how do you wash?’. The truth is you just have to suck it up and get on with it.”

Medical scientists are as confused as the rest of us. They know it is an immune system break down but not much more. The current working theory is that the dead skin cells and oil compounds on her skin is having a severe chemical reaction when they come into contact with any type of water or moisture. There is little, it seems, that science can do for Rachael Warwick.

She has traveled to Germany, and elsewhere, in seek of treatment but there really is none to be had. Her husband is her caregiver and she finds that drinking milk is less painful that drinking the water. She was first diagnosed with the affliction when she was 12 years old. She was grateful that the doctor she went to actually thought that this is what she suffered from. At least she knew, she says.

She avoids exercise so as to not sweat and can only tolerate showering once a week. Medical researchers have been working on a powerful anti allergy drug that is made up of mostly strong doses of anti-histamines. It has had limited success in human trials.

Rachael, and others, hope this new drug is truly effective and, of course, affordable. What would she do if the drug worked?

“I would go swimming and then I would go dancing in the rain.”