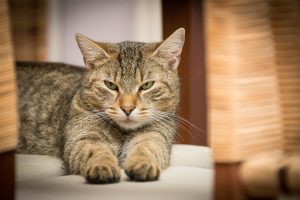 Recent research performed on domesticated cat DNA at the Institut Jacques Monod, in France, has discovered that the domesticated cat seems to have populated itself around the world by traveling the oceans with humans. The scientists collected and examined the DNA of 209 dead cats that they found all across Europe, Africa and the Middle East.

The researchers found an ancient burial site on Cyprus that dates back 9,500 years. They found cats there and speculation is that they may have been domesticated from wild cats as far back as 12,000 years ago. That was around the time agriculture simply, and seemingly miraculously, appeared on Earth. Speculation is that early farmers domesticated wild cats in Europe, the Middle East, and Africa in an effort to control the rodent populations.

In addition, they believe that cats, having first appeared in the Near East and Egypt, found their way to the rest of the world via sea voyages by seagoing peoples and traders as well as such sea faring cultures as the Norse Vikings. Cats, again, were brought along on voyages to deal with the proliferation of mice and rats that were found on ancient ships.

Eva Marie Geigl, lead author on the research, stated that, “We found, for the first time, that in prehistoric times, cats from the Near East and, in classical times, from Egypt, accompanied people on their journeys thereby conquering the Ancient World. They were the ancestors of our modern day cats.”

Despite this seeming revelation, many scientists are split with regard to whether “domestic” cats really are different from their wild ancestors. Their behaviors suggest, to many, that they are still wild even though they now live with and among humans.

“We don’t know the history of ancient cats, ” said Geigl. “We do not know their origin. We don’t know how their dispersal occurred.”

What history does know is that cats were domesticated and revered as messengers of the gods as far back as 6,000 years ago in Egypt and that they are equally revered in pagan Wiccan rites as familiars, or those able to speak with, and to move within, the spirit world. The descendants of the Egyptian cats eventually spread to Asia and Africa while what wild cats that were on the European continent were eventually tamed and distributed by early farming and trading cultures.

The Vikings traveled much of the nearby known world of their time including venturing into North America. They conquered much of Europe and Russia and brought cats along with them on their voyages. The DNA analysis done by this team will go a long way toward better understanding domestic cats who, still, breed with wild cats.

The cats, they believe, came to spread in two waves approximately 1,000 years from one another and that DNA analyzed in a Viking tomb in Germany discovered that the cat’s DNA found in the grave was remarkably similar to the DNA found in cats who has originated in Egypt.